Remembering William "Bill" H. May, Chairman of the Board of Directors of the Arnold and Mabel Beckman Foundation, 1942-2020

With heavy hearts we share the news that our Chairman, Bill May, has lost his battle with lung cancer. We send our deepest condolences to Bill’s wife and partner of 50 years, Barbara May, his children, grandchildren, extended family, and those that were blessed to know him.

Bill grew up in the Baltimore, Maryland area. He received a bachelor’s degree in mechanical engineering from Virginia Tech and a law degree from the University of Virginia School of Law. He served as a captain in the U.S. Air Force, and then moved to Southern California with his wife Barbara to pursue his law career. He joined Beckman Coulter in 1976 as a staff attorney with a specialty in patent law. Through Bill’s distinguished career at Beckman Coulter, he advanced to hold the positions of Vice President, General Counsel, and Secretary. Bill joined the Arnold and Mabel Beckman Foundation Board of Directors in 2001 and was elected Chair in 2016.

William and Barbara May, August 2019. 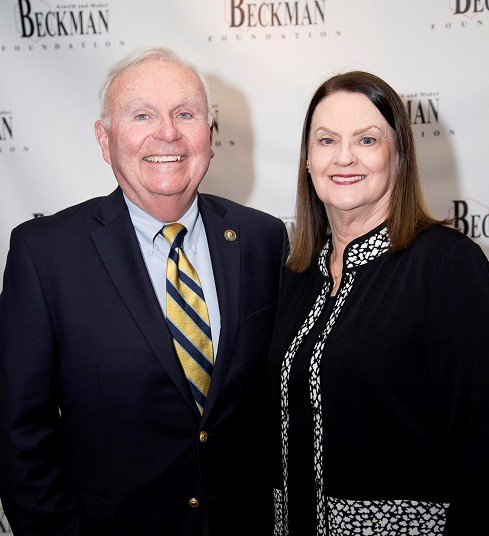 Bill was passionate about service and he has been very active in supporting many organizations, including the Boys’ Latin Preparatory School, Virginia Tech, the San Diego Zoological Society, the Santa Ana School District, and the Arnold and Mabel Beckman Foundation, among others. Bill was a wonderful leader who always sought out information and opinions from everyone to inform decisions. He made sure that we all kept a sense of humor and never passed up an opportunity to tell a joke. He helped everyone through challenges with laughter and compassion.

We were blessed to have his time and dedication to the mission of the Foundation, his stories about Dr. and Mrs. Beckman, and his unwavering optimism for the future. May God comfort and protect his loved ones as they mourn their loss. Bill will be laid to rest at the Riverside National Cemetery as a veteran of the U.S. Air Force.